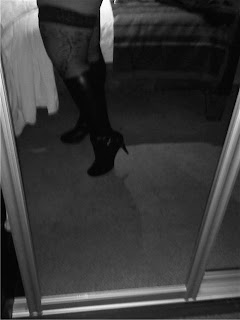 After a bottle of wine and a carpet picnic he push me down on the bed and forced himself inside me holding my neck as he moved slowly but with such intent. I decided to fight back and took hold of his hair and kissed him hard, pushing him back onto the bed and smothering him in my cleavage. I told him to wank himself hard. He did.

I held him by the throat, something he hadn't experienced and it surprised him how arousing it was. The feeling of venerability and domination. He was so hard when I offered my ass back to him. 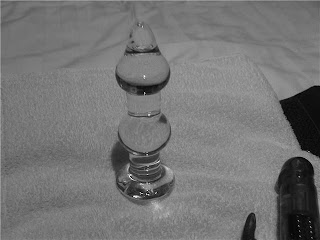 As he neared cuming he stopped and started to fist me again, this time though he placed the glass butt plug inside me. Its a challenge to take as it has 2 large bulbous points. He was gentle and coached me as I stretched around it each time. Once inside he hand disappeared inside me again and he them found the top of the glass butt plug and pushed it out one notch telling me to push it back inside as he did it. He kept doing this, building up pace and rubbing my clit as he did so. The feeling of both holes being so full and the attention to my clit was too much and within a few minutes I collapsed into a shuddering orgasm. He withdrew his hand and covered in my cum he wanked until he came over me.

Sat at desk now with a delightful ache where he has spanking, stretched and teased, wishing for more but having to wait for a few weeks more.
Posted by heelsnstocking at 11:03