The Idiot's guide to Kink 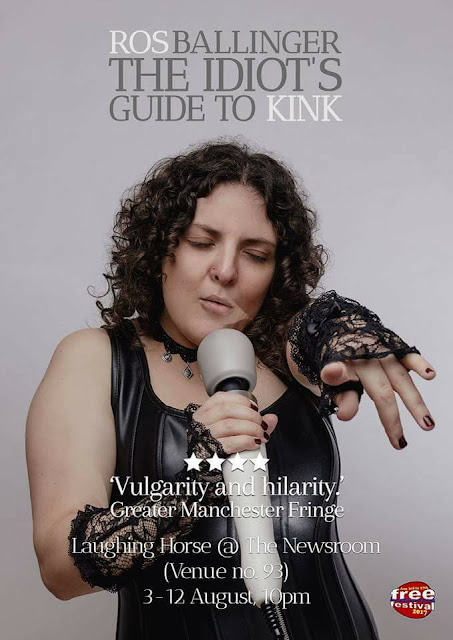 Ros Ballinger in her final show of the week at the Edinburgh Fringe on 12th August,

The Idiots Guide to Kink. 😄

Went to see Ros Ballinger for her final show of her run of ‘The idiots guide to kink’ at the Edinburgh Fringe on Saturday 12th August and it was time very well spent.

My interest in seeing this was to compare and contrast against my own journey with Heelsnstocking as to how kink would be portrayed in a public setting and how 60 minutes of humour would be integrated in to it.

So, the show started at 22:00 in a cellar room of a bar called the Newsroom, just near the end of Princes Street in Edinburgh and I would estimate that the room had a capacity of somewhere between 40-50. It was a free show i.e. no fee to attend, but as they all say at these types of event, it’s free to get in, but not free to get out (i.e. voluntary financial contributions are expected that are collected in a bucket by the performer at the exit door). I don’t know how it works with being able to book venues, but it was a little unfortunate in that the main entrance door to the room significantly slammed shut with a bang when people walked in during the performance and where I was sitting was also clearly the pathway between the bar upstairs and the storage area for additional spirits and other drinks that were required as and when, which had about four or five visits over the course of the hour, with slamming doors, of course. Coupled with a low volume microphone and the sounds of music from the bar upstairs, it didn’t make for the perfect environment, but hey, that’s the Fringe for ya and all part of the experience.

So on to the content. A really good set that covered a lot of aspects of the topic over the course of an hour that were engaging, witty, funny and addressed in a mature way without ever resorting to smuttiness or innuendo. I was originally going to not repeat any of the material in this review as I appreciate the work that goes in to building a set and its better as an audience member to not know what will be coming next and for it to be all fresh, but as Ros has put up the whole of the show that I was at on YouTube I’m guessing she’ll be OK with this.

She starts off the set talking about just wanting to meet someone ‘normal’, which is what we all want, although I’m sure that we all have our own distinct definition of what normal means and then swiftly moves on to an area that Heelnstocking and I are very familiar with and can relate to, interactions on social media for attempting to meet this normal person(s). Ros talks about opening gambits in messages from people who she has never had any previous interactions with and they can say things such as “I’m gonna ruin you!!” or the favourite comprehensive sales proposition of “Hi”….and erm, that’s it. In this section and you can hear it very clearly on the YouTube video, there are audible groans from the audience as well as some having the immediate response of “Oh no!!”. This certainly chimes with our experience, as written atthe start of 2014. Sadly it’s all too true and we are all surprised and shocked when we either first experience it or hear about it.

We then move on to the subject of the public face of kink, which is/was ’50 shades of Grey’, that is rightly disparaged as a load of old toot and the public face of sex accessory vendors, which is Ann Summers and their piss poor, cheap quality, high priced…….load of old toot. A show and tell of various sex items with amusing anecdotes follows and then we move in to group play and parties. Once again, as we can attest to and as Cammies on the Floor noted in her comment on our blog, it’s a game of patience to arrange group play due to trying to finding a convenient time for all to take part and then there are frequently cancellations and so forth…who really wants to go through all of this for a recreational activity???

Ros is really in her stride by this point and talks about the incredulity that people have about attending a sex party for five hours with them thinking it is ‘non stop banging away’ from opening to closing and expresses the insecurity that we all have of sometimes ‘not wanting to bother people’ if we wish to join in and not entirely sure about how we will be received. Practical advice is also dispensed about not taking things in to parties that you really don’t want to lose and this is an experience that we have had too 😔

How did Ros enter in to this world of kink? She simply asked. As Heelsnstocking did back in 2010.  Nobody is going to do it for you and asking is really easy in the internet age.

Ros finishes with a short anecdote about a man who says he will do absolutely anything for her, which is of a similar nature to one that Heelsnstocking told to me early in our adventure. Heelsnstocking had a guy who wanted to be sub and wished to do anything that would please her, so she got him to mow a huge lawn of a house that literally took hours whilst she simply sat comfortably on a chair. She was pleased with his work, but sadly for him, it wasn’t followed by any sexual activity.

And that was Ros Ballinger’s Idiots guide to kink. A great show, very brave to put this together, not only for the content, but as with all enterprises, the financial risk and operational work that is inherently wrapped around putting it together for our enjoyment.

Very funny, very engaging and also very honest and true. A real pleasure and I look forward to more.

You can catch up with Ros on the usual channels:

Go see Ros and support her, you’ll have a great time!!
YSL