Part 1 is here Dressed in white and ready for Le Glamours famous white party. My dress was goddess style with a scoop neck made by The Deviant Seammistress coupled with silver heels and my hair scraped up partially for practical reasons in the heat. YSL was wearing Ralph Lauren white trousers and linen shirt, white boating shoes, he really looked sexy in the Euro trash get up. The club was literally 100 yards from our apartment building, as we approached you could see women dressed as Vegas show girls on stilts and a man similarly dressed and entertaining the queue. I'd been told to ask for the manager but the staff spoke little English and Whilst the gesture of a little VIP treatment would of been great it wasn't why we were there.

We paid in and ordered a bottle of Ballentyne's whiskey.I write a note for the manager so he knows I was there, I didn't want him to think I didn't come when I said I would. The place was still quiet and we grabbed seats at the bar to enjoy people watching as the hoards of sexy couples entered all wearing white.

The music upped the pace and the dance floor started to fill. A woman with a Brazilian look to her and a Brazilian shaped bottom to match gave good entertainment on the poles just in front of us but before long her stage was taken by more professional looking pole dancers that climbed the height of the pole and displayed very well to the room her ability and her lacking in underwear. I'm sure the pleasure she gave us watching was also felt by her as she ended her display slipping slowly down the pole with her crotched jammed tightly against it.

We head downstairs for a look around, the rooms seemed a little lighter than I remembered with exception of the dark grope rooms, they were as dark as I can vividly recollect being fucked by the stranger last year.We huddled in the couples grope room and enthusiastically reached out n the darkness to fondle a stranger. Our advances were dismissed by the husbands hand, it seems there understand of the room was confused.

As action in the labyrinth of play rooms was yet to start up we headed back upstairs and enjoyed the music and more people watching. We both agreed the night felt different, perhaps because it wasn't new or we had yet to unwind fully, either way we were still enjoying ourselves. The outside area were the foam parties take place was open, we hadn't seen this area previously, clearly the club was busy and the extra room was needed.


A couple in there 70's walked passed us, the woman looking like an old screen syren, dressed sexy and carryingherself with such sexual prowess and confidence, the made partial clad in leather, Charlton Heston like, followed her proudly as the crowds parted for her. A moment later another striking couple passed us, again older, the woman in her later 60's, looking like Helen Mirren in a cat suit, her hair scraped back and pouting lips, her partner, clearly a PVC enthusiast held her chain that attached to her diamonte collar.


After a little more people watching we decided to go enjoy some fun. I headed straight for the medical table in the end chamber. YSL slowly fitted my heels into each stirrup before ceremonially un buttoning his shirt sleeves and rolling them up out of harms way. His warm breath on my clit made me shudder and ache, my cunt surged forward to greet his tongue. A few couples hid in the semi darkness watching as YSL drew an orgams out of me, a woman wanked his partners hard cock as she watched and waited her turn on the table. YSL slipped his fingers at first inside me and then worked his hand in, his mouth never leaving my clit as he did so. I was in such a state as he worked his hand against my spot and sucked hard on my clit. I could feel my climax building, that coiled up tension building in the pit of my stomach waiting to release. My cunt clenched YSL's as the oragsm took hold of me, every inch of my body felt like electricity was flowing through it as I cover YSL in my juices.

We headed to the bathrooms and freshened up, I had juices flowing down my thighs and my legs were still trembling. Once centred and refreshed we headed back to the couples grope room, the place was busier and we found a corner to play in. We kissed and awaiting wandering hands and before long I felt 2 hands touch my bottom. I whispered to YSL that we had a visitor. I unzipped YSL's trousers and reached for his cock, it was already semi hard and a took it in my mouth to complete the task.

The pair of hands enthusiastically took advantage of me being bent over and started to finger my cunt and then the familiar sensation of a tongue on my arsehole was felt. I could tell by the size of the hands it was a man that was taking advantage of me and I was thoroughly enjoying the sensation. The stranger worked more fingers inside me and I could feel pressure against my arsehole then a finger slip inside there as well. I was going to to cum, I stood up and kissed YSL, whispering the status update of what fingers were where.

As my orgasm started to build so did his intensity, his entire hand was inside and fisting me as my whole body shook as I climaxed. He didn't stop, his fingers adeptly manipulated both holes and my clit until I was in a complete frenzy. The stranger offered his cock to me, I bent over and took it in my mouth, YSL slipped his hardness inside me and held my hips firmly. The flashing image of me being spit roasted and being centre of these 2 cocks sent a further surge of arousal through me, I felt like I was on a cloud of pleasure.

The stranger reached round to pleasure me further while YSL fucked me, it was clear that in another circumstance this guy must be bisexual as it felt like he was daring YSL to thrust his cock against his hand. I stood and kissed the stranger and wanked both cocks, comparing the strangers cock to YSL, it was extremely firm, as long but not as much girth to it. He offered his cock to my cunt and in my best French accent I said "preservatife" meaning condom, I felt his cock shake which I assumed reflected his head movement to say no and he dropped to his knees and fisted me again, this time exploring my tummy and ass as he did so, clearly a BBW lover as his hands traced over my imperfections.

I came again after his fingers and tongue worked there magic this time my body went hyper sensitive, I thanked him and negotiating my cunts release from his hand we headed back to the dance floor.

After dancing our socks off and a stiff drink we headed to the dark room, the one where the single guys can go in. We could hear people n there already fucking but couldn't see where the fun was taking place. We found our own space and I sat back on my elbows and enjoyed YSL kissing my lips and neck. Hands reached out and touched my but it wasn't like the last time, this time the guy touching me was clearly just coping a feel and not interested in playing another hand touched me and clearly doesn't like the fullness of my body.

We don't like the vibe and we head back to the bar. YSL held me as he sat on the bar stool, delivering kisses to my neck and chest, he made me feel so good and feel so loved. It was about 4am and we decided to head back to the apartment and get some sleep so we could enjoy some time on the beach later that day. Part 1 is here 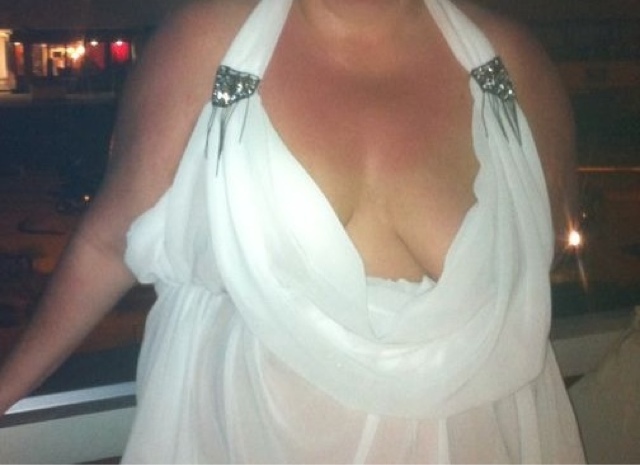