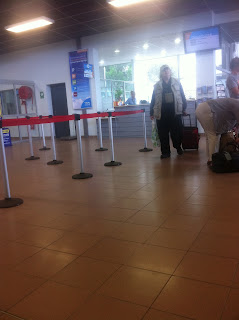 We were initially amused as 'andy'the guy who had faked being diabled on the inbound flighT and later been seen running up the beach to perve at sex was back to his disabled self. Refusing to even walk a step without aid or the use if a wheelchair. Both of us were tempted to whisper to him that we'd seen him run up the beach naked but thought better of it. 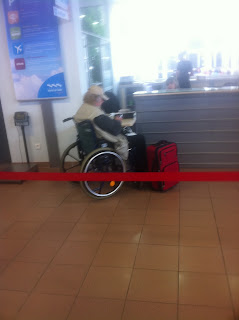 (try here on Youtube for a quick funny of Lou and Andy the look alike im referring too, Andy pretends to his friend he is disabled but when he turns his back....)
After checking the bags in I grabbed a coffee and sat down, my foot was hurting, it got a small blister on my toe earlier in the week but it had gotten worse.

YSL had been called back to the security area, I started to giggle, nervous laughter, knowing YSL was probably being asked what was in his bag! Sure enough the large aerosol shaped items that he hadn’t declared were the strap on and the Hitachi!!! Im sure security at such a resort doing it for the sport of it, im sure I would given the chance.

We landed and headed slowly as I was limping to collect our bags, all the way through the holiday guilt of my escape had been manageable, the fear of capture was minimised by knowing people that knew where I really was had my back covered. But right now I had a horrid sinking feeling, added to that my lack of sleep and that my phone wasn’t working so I couldn’t just call and check, I had it in my mind outside the gate would be an angry husband and I just couldn't shake it.

I tell YSL of my concerns and as ever he settles my mind and offers to keep his distance as we head through the gate, even to the point of telling me if he is there just to go and he would get home on his own (350miles!).


Once on the bus to the car park I breathed a sigh of relief and enjoyed a warm hug, he truly is the most amazing man. He had also fixed my phone god bless him!

We started the journey home, but tiredness was too much, I could feel myself drift into a trace and pulled into the next services. Food was needed, along with sleep as it had been almost 2 days since we had slept for more than an hour. We laughed as we ate our food and both looking at people as sexual targets and giving each other the nod. Joking we really must stop it now back in the UK.


One last stop planned; it was just as well as I know I couldn’t of made it home. We had tentatively planned this stop off before we went on holiday, its a club we have been wanting to go to, one of the top in the UK by all accounts. We checked into a hotel, initially tempted to have a nap but feared if we did we would be out of it for the night. Instead we sorted the bags out, ensuring my bags were back to ‘business trip’ status, YSL took the toys and lingerie.


Dressed and ready to go out to our final sexual adventure of the holiday. We weren’t going to miss the chance of going to one of the UK’s top swing clubs just because we were tired. The cab driver dropped us off outside and we headed inside La Chambre http://www.lachambre.biz/ . Greeted by a friendly bar lady we signed up, I had forgotten my ID but she loved my excuse of being so tired due to still fucking at Le Glamour at 6am that morning.

We were given a guided tour, the most effecient we have ever experience the only damper on the show round was the couple that were on the tour with us lacked decorum and deodorant, 2 very important aspects when swinging!


The format of the club was different to others we have visited, they encouraged people to stay out of the play rooms until later in the evening and to enjoy the club style socialising and entertainment downstairs. Neither of us were drinking alcohol, we people watched from seats around a dance floor and enjoyed each others company.

A man dress as a judge took the stage and what began was a court hearing of the case of the missing banana, 2 of the regulars where charged with the offence that had occurred at the party the week before. Having been found guilty they were stripped tied to a pole and cropped then, taken to the dance floor and foamed and feathered. 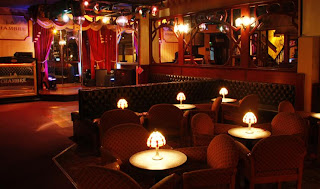 As the entertainment finished people filtered off to the changing rooms and some straight upstairs. We changed and headed to the play rooms, after a cursory look around we headed to the dark room. It wasn’t as dark as what we had experienced in Le Glamour but we liked the ambience and there were lots of couples playing. We lay down our towel and I enjoyed sucking YSL’s cock slowly until the deodorant dodgers arrived, purely detected by scent.

We up sticks and head to the mirrored room. A 3some was happening in the corner but we headed right onto the bed and YSL buried his face in my wetness. I enjoyed the mirrored view, I’m not normally one for wanting to see myself having sex, I find it distracting, but right now watching YSL between my legs was doing it for me.

He started to fist me as well as lick and I end up squirting everywhere, a wonderful start to the evening. He moves behind me and spoons me. Slowly fucking me as we watch the 3some and now another couple fucking. I climax again and we decide to head back to the dark room. We slowly fuck and watch a large blonde woman next to us be licked and then fucked. Her body language was inviting and I took the invitation on our behalf. Initially caressing her breasts and then inviting YSL to lick her as I held open her thighs for him. I sit back and masturbate watching YSL give pleasure, her soft moans turning to loud groans and gasps as she neared climax. A foot touches me and starts to caress my leg, then a womans hand reached for my breast and starts to play with my nipples. She then leans in to kiss me and I register it was the woman who stole the banana. She is taken with my breasts and spends the next 20 minutes purely taking pleasure from them. I’m soaked from her play and when YSL joins us he takes full advantage of the situation. He parts her lets and has her in the same state as the blonde, his enthusiasm and skill for licking pussy is matched by no-one. She cums hard and loud, I lie back and seamlessly he moves from her to enters me while she continues to play with my breasts, kiss and caress me, a group play merges with us. Its slow, rhythmic and so calming as all the bodies undulate together. Next thing I know YSL is waking me up! I fell asleep in the middle of group sex! And I think I snored! I seriously cant believe that this happened, ive never, especially with the passion that YSL takes me with have dozed off before!

After a revitalising orgasm and post sex introductions we decide to head back to the hotel and fall asleep together.

We have an early start and get to his place a couple of hours later. I enjoy a coffee and hate that we were about to part. After 10 solid days together, not a crossed word just pleasure in each other’s company, the holiday had surpassed my expectations by far, YSL had been so caring, loving and adventurous, I could not of wished for a better 10 days.
If you missed any of the Holiday posts they are here..... lots of pics, video and naughty Tales of our time in Cap D'Agde

HNT Picture Cap D'agde
Part 1 too aroused to sleep
Part 2 flight, arriving and omg
Part 3 Le Glamour, the best swing club experience ever
HNT Cap D'Agde; naked in see and audioboo of sharing Margarets Cunt
Part 4 - sex on the beach **aplause**
TMI video we took while away a
HNT - naked in the sea http://heelsnstocking.blogspot.com/2011/09/hnt-cap-d-naked-in-sea_28.html
Part 5 la tantra swing club
Part 6 10some on the beach
Part 7 The Germans and Sharing Margarets Cunt
Part 8 The most special day of the holiday
Part 9 the Sauna Club
Part 10 watersports and dunes
Part 11 2nd night at the Spa
Part 12 Beach entertainment and another club
Part 13 the bdsm club
Part 14 last night inCap D'agde
Posted by heelsnstocking at 22:11