TMI - breaking up is hard to do 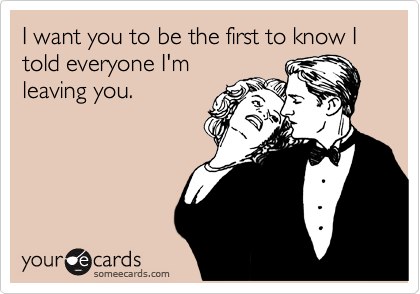 1. What’s the worst reason you have been given for breaking up?

Being too sexually demanding in bed, the guy said I was emasculating him as he never felt he could satisfy me.

Hmm being dumped for always wanting sex, I thought that was a good thing??


2. What’s the worst reason you gave, to someone, for breaking up?

I got a friend to ring up and say I was dead!

I was about 15 and had been dating this guy he was nice enough but about 6 weeks in a realised he only had one arm, yes this is true, it was a good false one! Honest! Anyway I was so embarrassed I hadn't noticed that I though best way was to play dead!

I bumped into him about a year or two later, thankfully he just said I looked better than he last heard and laughed it off!


Another one was I told a guy that I didn't like how he stalked me, he wasn't too happy and next morning I woke and he was sat at the end of my bed and for weeks sent teddy bears and sat in his car watching my parents house!


3. Have you ever engineered the end of a relationship e.g doing something you know will put the other person off? If yes, what did you do?

I irritate the husband daily by waking up... And he still doesn't get it!


4. Have you ever stayed with a partner just because you could not bear to end it?

Yep, we like to call it marriage vows and parenting here.


5. Have you ever encouraged a friend to end a relationship? What happened? Are you still friends?

I'm a good fan of stating out of other people's lives and just being there if they need me, there has only been one exception and that's because her partner was violent and she needed the encouragement to break free. She's back with him and we aren't friends anymore but I don't regret trying to help.

Bonus: Have you ever been the cause of a relationship to end? Tell us about it.

Not directly but I have been on the end an irate phone call from a pissed off wife when she went through her hubby's phone. Oops! I must of been sharp that day as I just said 'I'm just the Avon lady' and hung up, I did feel sorry for whoever the local Avon lady was!


Go see who else played
Posted by heelsnstocking at 23:21